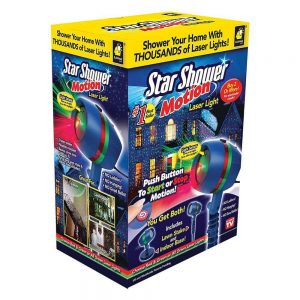 Product Description: The Star Shower Motion laser light is a quick and easy way to decorate your house for the Christmas or holiday season. Other types are also available for other holidays. There's no need for ladders, stapling, or checking individual bulbs. It also gives a cool modern look, and tear down is extremely simple when the season is over.

Putting up lights and decorations for Christmas and other holidays can be a real chore. You have to drag everything out of storage, spend hours out in the cold, staple things to your home, untangle wires, replace bulbs, and hope you don’t fall off that ladder.

What is you could decorate you house in a matter of minutes? Laser lights do just that. Simply run a electric cord, put a stake in the ground, and you’re good to go. They also look very cool and modern, and are super trendy right now. There are tons of options to choose from depending upon your budget. You can also choose super heavy duty options that cost well over $100. However the Star Shower Motion Laser Light is a great budget option at only around $20-30 (prices fluctuate).

What about other Holidays?

Star Shower also makes several other models the provide specific slides for a variety of holidays including Christmas, Halloween, 4th of July, and even Valentine’s Day. I will link these below this article, as well as other top rated laser lights, power cords, and connectors you need to connect a laser light projector outside.

The Star Shower Motion Laser Light is a great alternative to traditional Christmas lights. It can also be used to decorate trees, landscaping, or even indoors. This is the most simple light from the Star Shower line, which also makes it the most inexpensive. The Star Shower Motion Laser Light includes green, red and green, and still or motion for both of those colors. Simply push the top button to change colors, and the back button to enable or stop motion. The light also contains a light sensor that turns it on at dark and off during the day. If you would like to turn it on and off manually this can be accomplished via the three position switch on the top. The light is rated to be in the outdoors and from -30 degrees F to 100 degrees F (-35 C to 40 C). Star Shower claims that it is compatible with timers and photocells, but not with dimmers.

The Star Shower Motion Laser Light performed well in my texts. It is supposed to cover over 3200 sq. ft., and one light easily covered the entire front of my house. Therefore, you probably only need two or more lights if you are projecting onto a very large house, or are covering several areas at one time. The power cord is very short, and will require additional cords. I recommend that you use power cords, power strips, and connectors that are rated for outdoor use; I have linked many below.

The Star Shower Motion Laser Light performed very well and was super easy to set up. I was actually surprised by how simple it was, how good it looked, and how much this simplified the decoration process. These lights are definitely becoming more popular, but they are still sure to impress your neighbors and those who drive by. The ability to use them indoors is also an interesting party option, though for this model it would have to be dark enough to activate the light sensor. Other models are linked below; many have wireless controllers that you can use to control the light from inside your home.