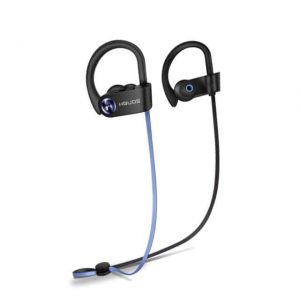 Product Description: The Hbuds H1 SE are the successor to the original Hbuds H1, although you've probably never heard of either. They are stellar headphones for the price. Clarity and vocals are better than the original Hbuds H1. However, they are not quite as loud, bass is good but not great, and the packaging and accessories are lacking when compared to the original H1. They are a better choice if you value vocals over loudness and bass.

The Hbuds H1 SE are an interesting pair of headphones, but are they really better than their predecessor, the Hbuds H1. I previously reviewed the H1, and was immediately extremely impressed. I couldn’t believe how good they sounded in comparison to the Senso Activbuds. They also survived a waterproof tests where I dunked the H1’s in water. They came out the other side with zero problems, and still playing music. Check out my review of the Hbuds H1 if you want to see this in action.

New Kid on the Block

The Hbuds H1 SE are an interesting pair of headphones, but are they really better than their predecessor, the Hbuds H1. I previously reviewed the H1, and was immediately extremely impressed. I couldn’t believe how good they sounded in comparison to the Senso Activbuds. They also survived a waterproof tests where I dunked the H1’s in water. They came out the other side with zero problems, and still playing music. Check out my review of the Hbuds H1 if you want to see this in action.

The H1 SE does take a serious hit when it comes to packaging. The original H1 had beautifully designed packaging that resembles the Jaybird X3 packaging. The new SE came in a simple cardboard box. However, this improved model currently sells for a less than the original. So, while it does take away from the initial impression, it’s also great that they could keep the H1 SE so affordable.

So what does this new model have to offer? For starters, they have been completely redesigned. I never had a problem with the original H1, but clearly the H1 SE has an improved build quality. The H1 SE feels a little heavier, and is overall more solid in comparison. On paper specs are identical for both headphones; Bluetooth 4.1+EDR, aptX-HD codec for better transmission and sound, IPX7 waterproof rating (can withstand submersion in up to 1 meter of water for up to 30 minutes), and 9 hours of battery life off of a 1.5 hour charge.

Sound wise they both sound fairly familiar, and that is to say that they both sound very good. It was actually difficult to nail the differences between these two headphones in the beginning. However, after a few hours I have a pretty good idea of where they differ. The new SE has a warmer and more balanced sound. This is especially true when it comes to voices. I tend to stream music for the most part, but I wanted something reproducible to compare these two. That led to pulling out some Dave Matthews Band (#41, One Sweet World) and Phil Collins (Take Me Home) that I had downloaded on my Samsung Galaxy S8+. With this type of music the new H1 SE really has an advantage over the original H1, and the music sounded more natural and clearer overall. They have a warmer and more authentic sound. That being said, I actually preferred the sound of the instrumentals of Dave Matthews Band on the original H1. The H1 also had a better bass response and low end when listening to Weezer (grungy rock) and 50 Cent (hip hop).

Altering the EQ of the headphones was of some help. I have the Samsung Galaxy S8+ at this time. On the S8 this is under (Settings -> Sounds and Vibration -> Sound quality and effects). Your phone or device should have similar setting in the settings menu. You can also download an EQ app from the Google Play Store, or the Apple App Store.

For the H1, which typically do better in the low end, I increased the the 4k, 8k and 16k Hz (higher) frequencies. This did help some to improve voices and higher frequencies, as well as eliminating some distortion in the mids. Conversely, altering the lower frequencies (63, 125, 250 Hz) did help a little to improve the bass on the new H1 SE. The undesirable part of this is that it also increased some rumbling that manifests as perceived bass in the mid range. To put it simply, the headphones generally do best in their native (normal) profiles, and do not respond well to changing the EQ settings. The H1’s get a little better high frequency response, but also become a little muddy in the mids. The H1 SE’s get a little better bass, but this also affects the clarity in a negative way.

So which one should you choose then? Well, it really depends upon what you want. I would say that for most people this new SE is the way to go. There is greater clarity, and an overall better sound. However, there’s something to be said for the bass reproduction on the H1’s. That’s not to say that the SE had bad bass, I just think they are tuned a little more to the mids and highs of music. The original H1’s also gets about 25% louder at max volume, comes with a carrying bag, and has much better packaging as you can see from the pictures. Sound preference is highly subjective, but in a pinch I would say that I prefer the new SE for everyday listening, and may lean toward the original H1 during hard workouts. You really can’t go wrong either way.